Hamilton TCP (H-TCP), developed by Hamilton Institute, is an enhancement to existing TCP congestion control protocol, with good mathematic and empirical basis. The authors makes an assumption that their improvement should behave as regular TCP in standard LAN and WAN networks where RTT and link capacity are not extremely high. But in the long distant fast networks, H-TCP is far more aggressive and more flexible while adjusting to available bandwidth and avoiding packet losses. Therefore two modes are used for congestion control and mode selection depends on the time since the last experienced congestion. In regular TCP window control algorithm, the window is increased by adding a constant value α and decreased by multiplying by β. The corresponding values are by default equals to 1 and 0.5. In H-TCP case the window estimation is a bit more complex, because both factors are not constant values, but are calculated during transmission.

The parameter values are estimated as follows. For each acknowledgment set:

On each congestion event set:

The α value depends on the time between experienced congestion events, while β depends on RTT and achieved bandwidth values. The constant values, as well as the Δ_L value, can be modified, in order to adjust the algorithm behavior to user expectations, but the default values are estimated empirically and seem to be the most suitable in most cases. The figures below present the behavior of congestion window, throughput and RTT values during tests performed by the H-TCP authors. In the first case β value was set to 0.5, in the second case the adaptive approach (explained with the equations above) was used. The throughput in the second case is far more stable and is closing to its maximal value. 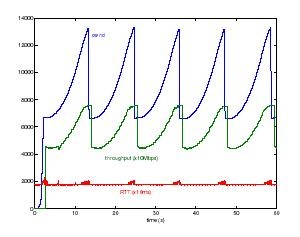 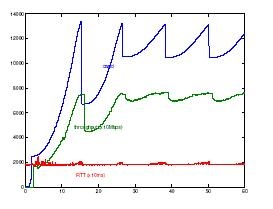 Another advantage of H-TCP is fairness and friendliness, which means that the algorithm is not "greedy", and will not consume the whole link capacity, but is able to fairly share the bandwidth with either another H-TCP like transmissions or any other TCP-like transmissions.
H-TCP congestion window control improves the dynamic of sending ratio and therefore provides better overall throughput value than regular TCP implementation. On the Hamilton Institute web page (http://www.hamilton.ie/net/htcp/\) more information is available, including papers, test results and algorithm implementations for Linux kernels 2.4 and 2.6.