NDT can be used to check the TCP configuration of any host that can run Java applets. The client connects to a Web page containing a special applet. The Web server that serves the applet must run a kernel with the Web100 extensions for TCP measurement instrumentation. The applet performs TCP memory-to-memory tests between the client and the Web100-instrumented server, and then uses the measurements from the Web100 instrumentation to find out about the TCP configuration of the client. NDT also detects common configuration errors such as duplex mismatch.

Besides the applet, there is also a command-line client called web100clt that can be used without a browser. The client works on Linux without any need for Web100 extensions, and can be compiled on other Unix systems as well. It doesn't require a Web server on the server side, just the NDT server web100srv - which requires a Web100-enhanced kernel.

Since NDT performs memory-to-memory tests, it avoids end-system bottlenecks such as file system or disk limitations. Therefore it is useful for estimating "pure" TCP throughput limitations for a system, better than, for instance, measuring the throughput of a large file retrieval from a public FTP or WWW server. In addition, NDT servers are supposed to be well-connected and lightly loaded.

When trying to tune a host for maximum throughput, it is a good idea to start testing it against an NDT server that is known to be relatively close to the host in question. Once the throughput with this server is satisfactory, one can try to further tune the host's TCP against a more distant NDT server. Several European NRENs as well as many sites in the U.S. operate NDT servers. 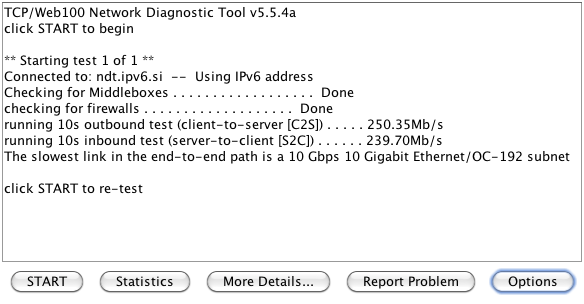 The following is an example run of the web100clt command-line client application. In this case, the client runs on a small Linux-based home router connected to a commercial broadband-over-cable Internet connection. The connection is marketed as "5000 kb/s downstream, 500 kb/s upstream", and it can be seen that this nominal bandwidth can in fact be achieved for an individual TCP connection.

Note the remark "-- Using IPv6 address". The example used the new version 3.3.12 of the NDT software, which includes support for both IPv4 and IPv6. Because both the client and the server support IPv6, the test is run over IPv6. To run an IPv4 test in this situation, one could have called the client with the -4 option, i.e. web100clt -4 -n ndt.switch.ch .

There are many public NDT server installations available on the Web. You should choose between the servers according to distance (in terms of RTT) and the throughput range you are interested in. The limits of your local connectivity can best be tested by connecting to a server with a fast(er) connection that is close by. If you want to tune your TCP parameters for "LFNs", use a server that is far away from you, but still reachable over a path without bottlenecks.

Development of NDT moved to Google Code and then to GitHub, and as of July 2011 there was some activity. Notably, the architecture and the detailed protocol for NDT were documented. One of the stated goals was to allow outside parties to write compatible NDT clients without consulting the NDT source code.

Measurement Lab (M-Lab) has been actively maintaining—jointly with a development team from Google—a Go-based NDT server implementation (github.com/m-lab/ndt-server).  As of August 2020, the actively developed version is NDT7.  Notable new features include: