Synagon is Python-based program that collects and graphs firewall values from Juniper routers. The tool first requires the user to select a router from a list. It will retrieve all the available firewall filters/counters from that router and the user can select any of these to graph. It was developed by DANTE for internal use, but could be made available on request (on a case by case basis), in an entirely unsupported manner. Please contact operations@dante.org.uk for more details.

Synagon comes as a single compressed archive, that can be copied in a directory and then invoked as any other standard python script.

It requires the following python libraries to operate:

The SNMP framework is required to SNMP to the routers.
For guidance how to install the packages please see the section below

You also need to create a network.py file that describes the network topology where the tool will act upon. The configuration files should be located in the same directory as the tool itself. Please look at the section below for more information on the format of the file. 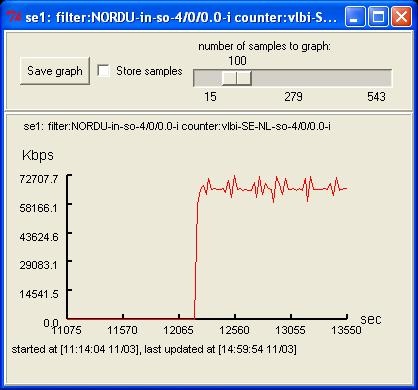 The tool can be invoked by double clicking on the file name (under windows) or by typing the following on the command shell:

Prior to that, a network.py configuration file must have been created and located at the directory where the tool has been invoked. It describes the location of the routers and the snmp community to use when contacting them.

Immediately after, a window with a single menu entry will appear. By clicking on the menu, a list of all routers described in the network.py will be given as submenus.

When a counter or policer of a firewall filter of a router is selected, the SNMP poling for that entity begins. After a few seconds, a window will appear that plots the requested values.

This section provides information about how the tool internally works.

The GUI thread updates a shared structure (a dictionary) with contact information about all the firewalls the user has chosen by that time to monitor.

The structure holds the following information:

There is an entry per counter and that entry has information about whether the counter should be retrieved (collect), the SNMP instance (instance) for that counter, whether it is a policer or a counter (type), the last byte counter value (bytes), the time the last value was received (epoch).

It operates as follows:

It uses SNMP to request the values from the router.

The gui thread (MainWindow class) first creates the user interfaces (based on the Tkinter Tcl/TK module) and is passed the geant network topology found in the network.py file. It then creates a menu list with all routers found in the topology. Each router entry has a submenu with an item of 'collect'. This item is bound to a function and if it is selected, the router is interrogated via SNMP on the Juniper Firewall MIB, and the collection of filter name/counter names for that router is retrieved. Because the interrogation may take tens of seconds, the firewall filter list is serialised onto the local directory using the cPickle builtin module. The file is given the name router_name.filter (e.g.: uk1.filters for router uk1) and it is stored in the local directory where the tool was invoked from. Next time the tool is invoked, it will check if there is a file list for that router, and if so, it will deserialise the list of firewall filters from the file and populate the routers' submenu. It could of course be the case the serialised firewall list can be out of date, though the 'collect' submenu entry for each router is always there and can be invoked to replace the current list (both on memory and disk) with the latest details.
If the user selects a firewall or policer to monitor from the submenu list, it will populate the active_firewall_list with that counter/policer, and the main thread will take it up and begin retrieving data for that counter/policer.

The main thread retrieves and passes the calculated rate to the MainWindow thread onto a queue that the main thread populates and the gui thread gets its data from. Because the updates can come from a variety of different firewall filters the queue is indexed with a text string which is a unique identifier based upon router name, firewall filter name, counter/policer name.
The gui thread periodically (i.e.: every 250ms) check if there are data in the above mentioned queue, If the identifier hasn't been seen before, a new window is created where the values are plotted. If the window already exists, then it is updated with that value and its contents are redrawn. A window is an instance of the class PlotList.

When a window is closed by the user, the gui modifies the active_firewall_list for that policer by setting the 'collect' attribute to None, and the main thread next time will reach that counter/policer, it will ignore it.

The tool consists of several files:

It is possible by using the squeeze tool (available at http://www.pythonware.com/products/python/squeeze/index.htm\) to make this file into a compressed python executable archive.

The build_synagon.bat uses the squeeze tool to archive all this file into one.

newtork.py descibes the nework's topology - its format can be deduced by inspection. Currently the network topology name (graph name) should be set to 'geant' - the script could be adjusted to change this behaviour.

Packages usually come in a source format and they compiled at the time of the installation.
Packages can be complete python source code or have extension in other languages (c, c++) .
The packages can also come in binary form.

Many python packages which have extension written in some oher language, need to be compiled into a binary package before distributing to platform like windows, because not all windows machine have c or c++ compilers that a package may require.

The source version can be downloaded from http://mysnmp.sourceforge.net

When the file is uncompressed, the user should invoke the setup.py:

setup.py install
There is also a binary version for Windows that exists in the NEP's wiki. It has a simple GUI. Just keep pushing the 'next' button until the package is installed.