CTA is a community of astrophysics users which already had its own AAI solution in place, and represents for AARC, in this respect, a very good example of how to address the needs of a community who already developed an AAI. In this case their AAI solution was based on a SAML stand-alone, catch all Identity Provider, integrated with a Group management tool used for Authorization on selected service providers.

This pilot propose to provide a non-invasive solution to simplify access to CTA services from eduGAIN and the CTA community.

The requirements which have been identified from the beginning to add the CTA  community to the eduGAIN interferation, from the CTA perspective, are:

The work which has been carried out in the CTA pilot of AARC is aimed at providing to the CTA community the eduGAIN authentication services ensuring at the same time a way to onboard this scientific community  into eduGAIN. An infrastructure has been deployed based on the model proposed by the AARC Blueprint Architecture to enable the management of users coming from both eduGAIN Identity Providers and the CTA standalone IdP. The core component of the new infrastructure is the SATOSA IdP/SP proxy, as the central AAI layer to serve the CTA community of users. In addition to that, an external attribute authority (COmanage) has been plugged to the  proxy, in order to manage user enrollment process, ensure injection of additional user authorization attributes, allow for account linking whenever appropriate, requested by the users and granted by the manager of the collaboration.

The proposed components within this pilot are highly flexible, which means that other scientific communities can easily adapt the components to fit their own authentication and authorization needs.

While onboarding the CTA community, to reach the desired AAI model (based on a central proxy and a community Attribute Authority (COmanage)), two main streams of work have been designed and implemented:

To provision IDs of already existing CTA users into COmanage, we have made use of a temporary LDAP server and the LDAP user provisioning plugin of COmanage.

The first step implemented in this phase of the pilot consisted of the integration of COmanage and Grouper. Grouper is a Group management tool used by the CTA community to manage Authorization. One of the requirements for CTA is to keep making use of this tool as a front end to their services. COmanage is a comprehensive Attribute Authority, managing the enrollment of users via their IdPs through different configurable workflows. For CTA user self-enrollment via a moderator admin user has been implemented. 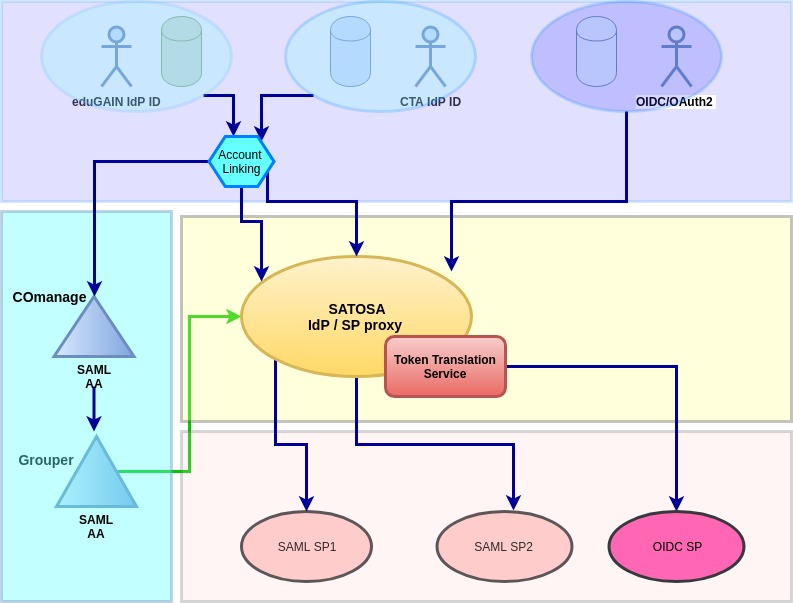 The AARC CTA pilot system  has been succesfully tested by the CTA AAI experts which have been able to succesfully authenticate and get authorized on specific CTA service providers.

The designed workflow, supported by the SaToSa proxy and its implemented microservices, has proven to work and be reliable, supporting the desired authentication and authorization processes.

The main benefits for the CTA community can be summarized as follows:

All the orginal goals of the pilot have been reached.

In a following phase,  social and eGov identities could be included via Identity Hub.

The AARC Blueprint Architecture was used as a model to design the pilot by clearly separating each component and its role in the system architecture. The pilot and its testbed will be maintained by INAF.