Hades Active Delay Evaluation System (HADES) devices (previously called IPPM devices) were developed by the WiN-Labor at RRZE (Regional Computing Centre Erlangen), to provide QoS measurements in DFN's G-WiN infrastructure based on the metrics developed by the IETFIPPM WG. In addition to DFN's backbone, HADES devices have been deployed in numerous GEANT/GEANT2 Points of Prescence (PoPs).

The examples that follow were generated using the new (experimental) HADES front-end in early June 2006. 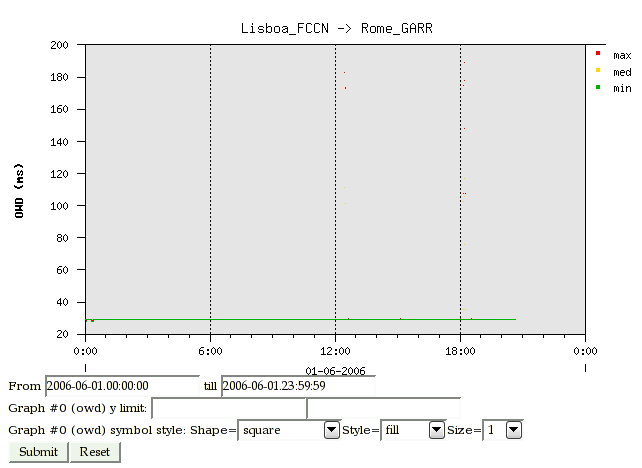 The default view selects the scale on the y (delay) axis so that all values fit in. In this case we see that there were two cases (around 12:30 and around 18:10) where there were "outliers" with delays up to 190ms, much higher than the average of about 30ms.

In the presence of such outliers, the auto-scaling feature makes it hard to discern variations in the non-outlying values. Fortunately, the new interface allows us to select the y axis scale by hand, so that we can zoom in to the delay range that we are interested in: 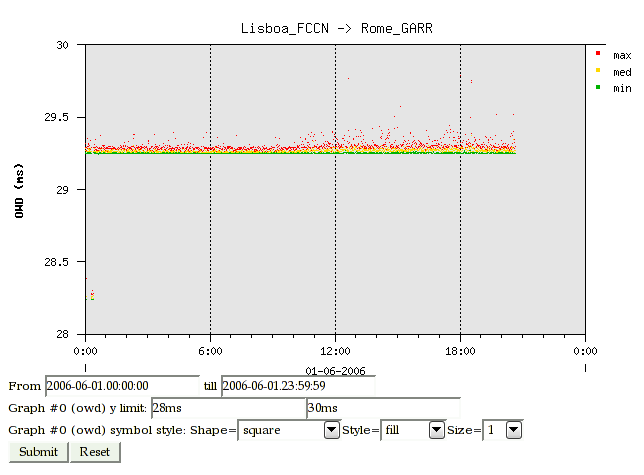 It now becomes evident that most of the samples lie in a very narrow band between 29.25 and 29.5 milliseconds. Interestingly, there are a few outliers towards lower delays. These could be artifacts of clock inaccuracies, or they could point to some kind of routing anomaly, although the latter seems less probable, because routing anomalies normally don't lead to shorter delays.

Note that the IPPM system is being developed for the NREN community, hence its feature developments focus on that specific community needs; for example, it implements measurement of out of order packets as well as metric measurements for different IP Precedence values.