WaTTS is a Token Translation Service developed by KIT in the context of the INDIGO Data Cloud project. WaTTS was developed to address the users' need to access services that do not directly utilise federated access and require that the users use security tokens, such as SSH keys, X.509 ertificates, S3 access tokens etc. In this AARC pilot, WaTTS is integrated with the EGI CheckIn service, so that users can access WaTTS using their EGI accounts, while authenticating either at their home organisations or using their socialIDs. With WaTTS, users are able to manage the SSH access to a number of trusted VMs from a single point in a secure and user-friendly manner. In this pilot, WaTTS is used to manage their SSH public keys and provision them on demand to an authorised set of VMs. Although in this pilot WaTTS is integrated with the EGI CheckIn service, the solution is not limited to EGI, and can be used at any community/infrastructure/service where there is a need to "bridge" between different technologies, and can be run as a standalone "plug-and-play" solution. The only requirement is that the community/infrastructure/service supports integration of OIDC services.

Goal of the pilot is to demonstrate how the credentials can be managed according to user's identity. From the research/user point of view, the desired behavior is having an SSH access to desired VMs. From the administrator/coordinator point of view, the desired outcome is providing access to users in a straightforward manner, as easy as user uploading it's SSH key. However, such access should be granted only to authorized users. Therefore, LoA discrimination is used.

The pilot structure is shown in picture below. 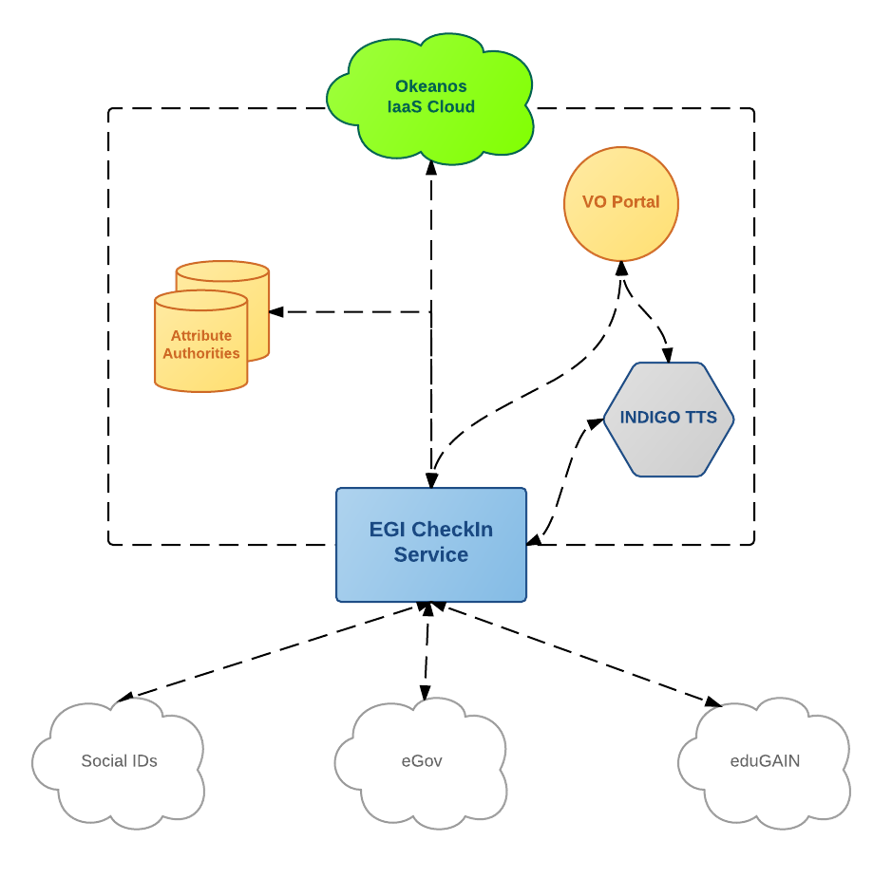 The pilot authentication flow is shown below:

It is important to mention that at neither step the credentials (in this case SSH keys) are stored on the WATTS service.

WaTTS is actively maintained and it is running in production. As already mentioned, it is not limited to EGI OIDC providers, but already supports Human Brain Project (HBP), b2access, Google, and naturally, INDIGO IAM (INDIGO Access Management). Adding additional IdPs or configuring the service is straightforward. Support for additional credentials is done through plugins, for which the API is defined, and can therefore be developed as needed.

Note that page might be moved in the future to https://github.com/watts-kit/watts.